ECFA Bylaws 2023
The East Coast Football Association Bylaws are in place as a guide. This
guide is governed by the ECFA Staff and adhered to by ECFA Team
Ownership. This guide will not be used to benefit any one team more
than another and the league President and Staff has the authority to
make common sense judgements to maintain good order and discipline.
Final 12/14/2020
Section 1. - The name of the organization shall be the East Coast Football Association (ECFA)
Section 2. - The names of the Divisions shall be determined by the League President once all teams are determined.
The East Coast Football Association is formed for the following purposes: (a) To provide a football league that fosters and facilitates amateur tackle training and competitions regionally, nationally, and internationally (b) To support the
growth of amateur football regionally, nationally, and internationally (c) To organize, coordinate, and support football
games with other regional, national, and international; football teams and leagues (d) To train, educate, and promote
football players who desire to play on regional, national, and international football teams (e) To publish information which
discusses subjects described in (a) through (d) above (f) To solicit, receive, maintain, invest, and reinvest funds of real
and personal property and to contribute its income and principal as deemed advisable for the purposes provided in (a)
through (e) above.
Section 1. - The East Coast Football Association shall consist of all current ECFA teams that meet admission
requirements, teams that are in good standing and teams that have paid the league fees due at the scheduled times given,
unless otherwise approved by the League’s Staff. Membership is recognized as being season-by-season.
Section 2. - Each ECFA team in good standing shall be entitled to one (1) vote, when a voting situation is presented.
Section 3. - A team shall be considered not in good standing if it has forfeited a game or if, in the judgment of the
ECFA Staff, it has acted in willful violation of the East Coast Football Association By-Laws or Standing Rules. A
forfeited game is defined as a game played, not played or not completed because:
-

The home team changed the game time, day or location without proper notification as outlined in the ECFA By-Laws per Conduct and Regulation of Team Unit, Section 9
-

One of the teams used an ineligible player. A player without a release from his former team.
(A player’s ineligibility must be documented prior to game day kickoff)
Section 4. - All new teams are on a one-year probationary period with voting rights, with exception of By-Laws issues.
Probationary status will be reviewed by the ECFA Staff. A team needs a vote by the President and/or Commissioners to
pass from probationary status to good standing. If there is a negative vote, in which majority of the teams within good standing
vote for a team to be removed, the President and/or Commissioners will strongly consider the vote into the final decision.
Section 5. - All league debts are to be paid in full one (1) month prior to opening date of the current season.
If payment is not made, the team has decided to forfeit the current season. Regardless of which
team violates this, it shall be handled on a zero-tolerance basis.
Section 6. - A team that has forfeited a prior season must be voted in by the majority of the returning ECFA Owners and will be required to pay the league dues in full by the date given by the ECFA President.
Section 7. – ECFA Players that choose to play in other semi-pro/minor professional leagues during the same calendar year are subject to the following restrictions.
1. These players cannot miss an ECFA to participate in any other league.
2. These players are not eligible for selection or play for any ECFA All-Star events.
Section 1. - The East Coast Football Association leadership shall consist of league President, Vice President, Secretary, Treasurer, Lead Commissioner, Personnel Officer, President of the Player Association, and Head of Security.
Section 2. - The President CANNOT be voted out for any reason besides criminal actions detrimental to the league.
Section 3. - The East Coast Football Association Vice President CANNOT be released from his/her duties for any reason besides the following:
•

and criminal actions detrimental to the league
Section 4. – The East Coast Football Association Officers shall consist of a Commissioner, Deputy Commissioner(s) and Head of Officials.
Section 5. – ECFA Officers can be removed by the league President and Vice President for cause.
Section 6. - The East Coast Football Association shall have 2 directors who report to the Vice President as requested:
Head of Officials and Lead Commissioner.
Section 7. - The Director positions are appointed and Directors will maintain the status until resigning or removal by the
ECFA President.
President Duties:
-

Preside over all ECFA meetings
-

Presides over the Leadership and Admissions
-

Have general supervision over the affairs of the ECFA
-

Assume the duties of the President in his/her absence, incapacity or resignation
-

Have direct purview over director positions
-

Report all League aspect to the President, before made public
Secretary Duties:
-

Notify all ECFA members of meetings
-

Circulate copies of the minutes of each meeting
Treasurer Duties:
-

Maintain complete and accurate records of the ECFA's income and expenditures
-

Have charge of all ECFA finances; will have two-person integrity with the league President
- Present a current report on the ECFA's finances at each league meeting
Commissioner(s) Duties:
-

Cannot be a member of an active ECFA Team
-

Responsible for league and player discipline in their conference/division
-

Responsible for ensuring all ECFA games have assigned referees weekly
-

All judgments shall go before the ECFA President and to be made official prior to team notifications.
-

The ECFA President will cast a vote in the event of a tie.
-

The President has the power to veto a judgment based on best interest of the league.
Section 3. - In the event of an emergency situation, the Judiciary Committee may act upon the grievance prior to the
receipt of written copy of said grievance.
Section 4. - The Judiciary Committee may elect to conduct hearings in person, electronic correspondence or by conference call. All notes will be made public by request.
Section 5. - Any Judiciary Committee decision will be immediately released to the ECFA membership by the ECFA President
Section 6. - Any grievance decision by the Judiciary Committee may be appealed to the Vice President.
Section 7. – The Judiciary Committee has the authority to recommend the removal of teams who are in violation of ECFA By-Laws or if they are operating in a manner that may be determined to be detrimental to league business.
Section 8. – A recommendation of removal will go to the Vice President for action, implementation and/or approval
These By-Laws may be amended at an ECFA Meeting by a majority vote of the membership present in good standing, provided that written or verbal notice of the proposed change or amendment has been given to the ECFA President no later than one (1) month prior to the upcoming season.
The Admission Committee shall consist of the President, VP, and a minimum of four (3) SENIOR members, two (2) north and two (2) south, as appointed by the ECFA President.
It shall be the duty of the Admissions Committee to:
-

Receive applications from new teams via E-mail.
- Review and recommend applications for meeting minimal requirements.
- Investigate new team applications and present at the next Staff Meeting.
- All teams meeting minimal requirements shall be invited to the next League Meeting for presentation to the entire ECFA.
In order for a new team to be admitted into the ECFA, majority vote is required. Unless league President exercise his/her right for direct entry of teams. The focal point for this measurement shall be the established playing field that meets ECFA standards, for that franchise. (President’s Office Reserve the right to allow or decline admission despite vote)
****A team returning to the ECFA in good standing is eligible for automatic re-entry. ****
The preparation of the schedule shall be the responsibility of the ECFA President.
All special requests for home game dates must be submitted to the ECFA President prior to the date given by the League President. Once the regular season schedule is released to the league members there can no more changes of opponents and/or game dates. If a team drops after the schedules are released then it will be the League’s President duty to fill in any open dates if possible.
All games will be played as scheduled; Games with prior approved permission from the Commissioner for relocation due to fire, flood, other acts of God, or the Stadium Facility management access denial will be acted upon by the Commissioner. Once all information related to the relocation request has been submitted, the Commissioner will hand down a final determination with approval from the League’s President.
Request for relocation of game field must be submitted as soon as possible. The ECFA understands that certain events may take place that are out of the control of the home team but in order for the league to assist the home team, the league must be notified as soon as possible. If a delay in notification to the Commissioner has been found, then the game MAY be awarded to the visiting team. Other disciplinary actions can be administered against the home team by the Judiciary Committee.
•

Preseason - Each team may schedule their own preseason games. Their opponents can be interleague, utilizing teams from other leagues. Both teams will need to govern a set of rules either NFL or NCAA collegian rules to play by. The teams win/loss record will be not utilized nor acknowledged for ECFA regular season records; however, the games with officials will count towards your overall record.
-- Regular Season:
- 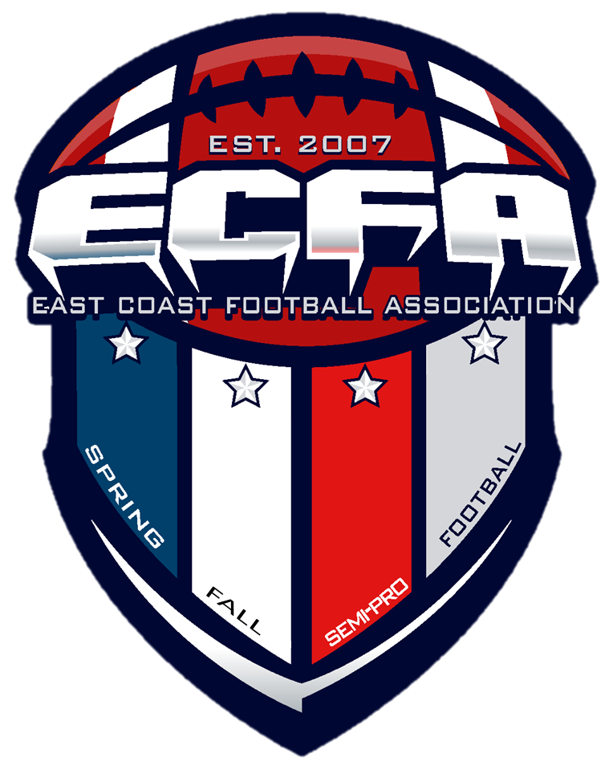